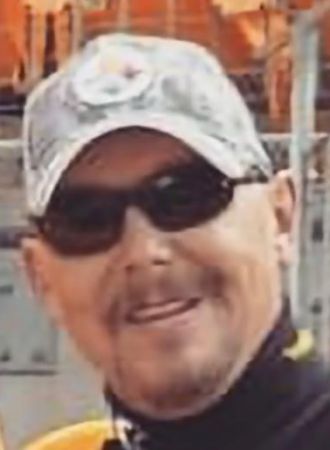 Stephen A. Nyzio, 59, of Wyoming, passed away Monday May 30th, 2022 after a long battle with Cancer at Allied Hospice in Wilkes-Barre.

Born in Pittston son of Carol Homschek Knowles he was a graduate of Pittston Area High School.

He was a member of St. Francis Cabrini Church in Carverton.

Stephen worked in Construction, Maintenance at the Gabriel Shelter in Pittston and also the Old Luzerne Avenue School.

Anyone who knew Stephen knows that he was a Avid Pittsburgh Steelers fan never missing a game and always wearing the teams clothing.

Stephen was preceded in death by his Step-Father Leroy Knowles.

He is Survived by his wife of 33 years the former Leanne Recupero, Son Tony of Wyoming, Brother, Joseph and his wife Toni Ann of Pittston, Mother in Law, Nancy Recupero, Brother in law Tony and his wife Leigh of Avoca, Aunt Mary Jo Morreale of Pittston, Niece, Nicole Nyzio, Cousins, Salvatore and Amy Morreale, and his two buddies Beagle and Hissy.

A Mass of Christian Burial will be held on Saturday June 4th, 2022 at 10a.m. in St. Francis Cabrini Church at 585 Mount Olivet Road in Carverton with the Rev. James Alco Officiating.  Family and Friends may call on Friday from 5p.m. until 8p.m. at the Howell-Lussi Funeral Home Inc., at 509 Wyoming Avenue in West Pittston.  Interment will be held at the convenience of the Family.